When it comes to video games, the Role Playing Game (RPG) genre has always held a special place in my heart. In an RPG, you play the role of a character on an adventure in some sort of immersive world. Part of the fun is watching your character grow and develop as you explore new frontiers and work toward some greater goal or quest. Games like Pokemon, EarthBound, and Chrono Trigger are good examples. If you’re engaging in random turn-based battles with monsters, getting experience points and gold and “leveling up” in the process, chances are you’re playing an RPG (and I’m jealous).

And I can’t think of a better way to get acquainted with the genre than the first RPG I ever played: Final Fantasy.  I was maybe 12 or 13 at the time, and I’ll always remember the first time I encountered Ogres: 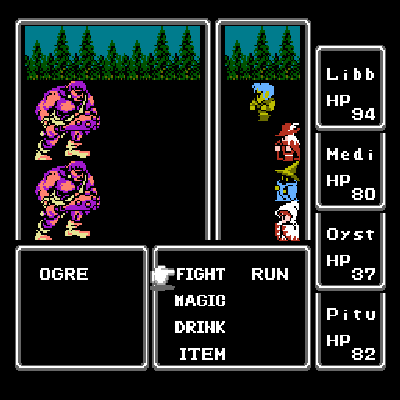 That’s how I first got introduced to grinding. Not the type of grinding one might do at a club (which, having attended a few middle school dances, I was unfortunately all too familiar with). I’m talking about video game grinding. Techopedia provides a great definition:

Grinding refers to the playing time spent doing repetitive tasks within a game to unlock a particular game item or to build the experience needed to progress smoothly through the game. Grinding most commonly involves killing the same set of opponents over and over in order to gain experience points or gold.

When I first encountered these Ogres, they were tough. My party took a lot of damage and barely survived the battle; however, when we won the day I was pleasantly surprised to see that defeating the Ogres yielded a ton of experience points and they were loaded with gold. Punching above my weight was worth it – enough fights with these guys and I could quickly level up my party, then stroll into a nearby town with enough gold to arm my team with the best equipment on the market before continuing on with my adventure. And so I stuck around, wandering around the forest killing Ogres, again and again and again. That’s grinding.

And I did it for hours.

Any gamer worth his salt has done something like this. Maybe you mastered all the mini-games in Ocarina of Time, getting all your quiver upgrades and your heart pieces and your rupees before storming Ganon’s Castle. Maybe you played the same Mega Man level again and again because you knew it had multiple Energy Tanks and you wanted to max them out before going after Dr. Wiley. Or perhaps you simply took the time to stumble around in the darkness of the Caverns in Goldeneye, dutifully destroying every box in the arms cache to load up on ammunition.

At some point, you postponed the adventure and engaged in some sort repetitive, perhaps even tedious, activity, either for your later benefit or out of some intrinsic need for “completeness.” And at that point, you had to ask yourself:

Is this work, or is this fun?

Some genres blur the lines even more. Simulators such as Sim City and Harvest Moon involve performing tasks that people actually get paid to do in real life. My favorite example is from The Office where Dwight Schrute creates a Second Life character who is also a paper salesman named Dwight.

I bring this up because people talk a lot about work/life balance, and I don’t really like the concept. It frames “work” as this tedious thing that, unfortunately, I have to do in order to support “life,” which is the fun thing I get to do after hours with my family and friends.

But if grinding in video games is so tedious, why do we tolerate it?

I think it’s because, on some level, it is fun. It’s fun to see progress. It’s fun to identify opportunities for efficiency and competitive advantage and leverage the hell out of them. And it’s fun to think about how all this work is going to pay off when you go into your next battle, over-prepared and ready for anything. And all these fun activities are things I can, and should, be enjoying at the office.

At the end of the day, there is no work/life balance. There’s just life, and so the best you can ask of yourself is to be present in the activity you’re doing, regardless of how you label it.

One thought on ““Be More Productive.” Work/Life Balance (And Grinding).”