To recap last week: my January NYR is to look like Brad Pitt in the movie Fight Club. In case you need a visual, here’s what we’re talking about: 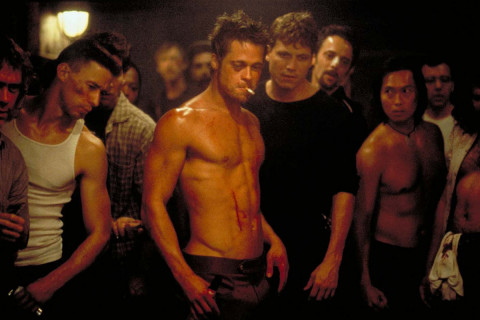 Nice. Now, it took me a while to come to terms with this idea – not only because it made me feel like an egotistical person, but also because it seemed… kind of weird, right? I mean, Fight Club was released in 1999, so why was this still my goal twenty years later (and yes writing that last part made me feel incredibly old)?

Well, I don’t think it’s that weird, but I don’t want to spend a lot of time arguing about it. Trying to prove you’re not weird is like trying prove you’re not drunk: the more effort you put into it, the less convincing you are. But before we move on, here are my two main arguments for why it’s not that weird that I want to look like Brad Pitt in Fight Club:

I got 14.5 million results when I Googled “Brad Pitt Fight Club”, and all of the top articles were geared toward getting Brad Pitt’s physique from the movie. So I dove in. Soon I was reading websites with names like BroBible, High Snobiety, and my personal favorite… SUPERHEROJACKED.COM. And you can imagine my surprise when I discovered that there was a very specific workout geared toward my exact goal. Here it is:

Supposedly, this was the workout Brad Pitt did in preparation for the movie. I say supposedly because, try as I might, I wasn’t able to find any sort or original article or interview confirming this.

Perfect! But I still needed to make some tweaks to turn this into an effective goal. It was specific enough, but I needed to decide what I was going to measure.

The first thing I considered was a simple strength goal. I thought, “why not make it my goal to be able to complete this entire workout by the end of the year?” Two problems with this:

I also considered structuring my goal around body composition. Surprisingly, there was a lot of information online about this. The general consensus: Brad was 5’11”, 166 pounds and about 8% body fat during the movie. But trying to build a goal around this started to feel silly real fast. For example, I’m shorter than Brad (I’m between 5’8″ and 5’9″ depending on my mood) so I needed to decide how to account for that, and I already weigh around 166 pounds. And things like weight and body fat measurements can change a lot day-to-day for reasons completely unrelated to going to the gym, so the idea of shooting for a body fat percentage number didn’t seem particularly motivating to me.

This is as good a time as any to address an important point: there is a diet component that goes along with the Brad Pitt Workout that I will not be incorporating into my goal. If you look it up, you’ll find that it’s pretty in-line with what most folks are into these days, myself included (high protein, low carbs). On the diet side, I’m mainly focusing on getting enough protein in. The workout claims Brad had eight egg whites every morning for breakfast, followed by five more meals of comparable size. Guys, that’s the equivalent of eating 48 eggs a day, which is literally what Gaston ate when he was a lad. That’s a lot of protein.

But remember: the original goal here was to “Workout More.” So that’s what I decided to track. Not the weight I was lifting or the fat I was losing or the muscle I was putting on, but my adherence to the workout.

At long last, I had my New Year’s Resolution:

Next week, I’ll share the spreadsheet I’ve been using to track my goal. I’ll get into some specifics (determining what counts as a “workout”, coming up with the count and time limit, etc.) and I’ll talk some strategy about dealing with contingencies.